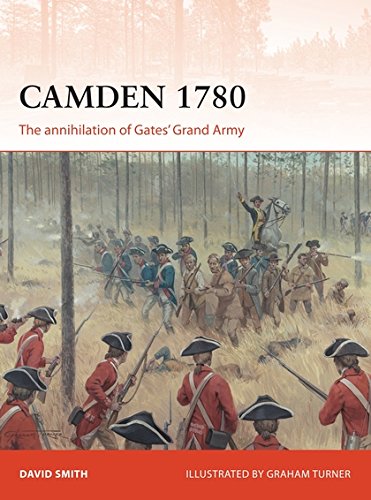 Brand : Osprey Publishing
from GB
to Australia
in 5-8 days
At your doorstep by Jan 28  to Jan 31 with standard delivery

As the American Revolution continued, the British refocused their fight on the southern colonies in the hopes of triggering an outbreak of loyalism that would sweep the rebels aside. Under Sir Henry Clinton they captured Savannah at the end of 1778, and Charleston in May 1780, with Lord Cornwallis being left in command with just 8,500 men under him. Too thinly spread to guard the 15,000 square miles he was responsible for, Cornwallis went on the offensive, invading North Carolina and using Camden as a launch pad. This new history reveals how Cornwallis was able to use his aggressive strategy to great effect and how the overconfidence of the re-formed American forces under Horatio Gates was to result in a shocking defeat on the night of 15 August 1780 - a defeat that would allow Cornwallis to push deep into North Carolina the following year, where he would only be stopped by the American victory at Yorktown.
Show More
Reviews