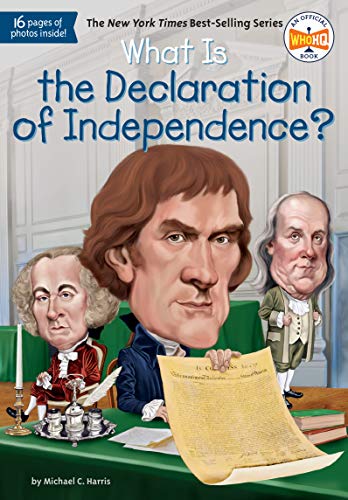 About the Author ---------------- Michael C. Harris is a freelance writer and college writing instructor based in Evanton, Illinois, where he lives with his wife, two soccer-loving sons, a dwarf hamster, a gecko, and a really weird cat. He has written a number of books for kids—including Cool Science titles about artificial intelligence, weird diseases, and spare body parts for humans. Read more ( javascript:void(0) ) Excerpt. © Reprinted by permission. All rights reserved. -------------------------------------------------------- What Is the Declaration of Independence? June 26, 1776, Philadelphia The June heat in Philadelphia was blistering. Even before the sun came up, it was hot. Thomas Jefferson of Virginia did his best to stay cool as he wrote in the room he had rented on Market Street. He was writing a letter. But it was no ordinary letter. Along with Jefferson, important men from all thirteen American colonies had come to Philadelphia. They planned to do something brave and dangerous. The colonies were declaring their freedom from Great Britain. They were going to create a new country—the United States of America. Thomas Jefferson was chosen to write a public letter to the British king listing all the reasons why people in America were rebelling. Jefferson also wanted the letter to show other countries in Europe why this was the right decision for America. It took Jefferson—with help from others—only a couple of weeks to finish one of the most important documents in history: the Declaration of Independence. Sending an announcement like this—a declaration—meant that the colonists in America would go to war. The British army was large and powerful. The colonists didn’t even have an army. The chances were slim that the Americans could win. Many would certainly die. And even if by some chance the colonists did win their freedom, could thirteen different colonies create a new country together? For two weeks Jefferson worked on the Declaration of Independence. He sat at the small desk that he had made by hand. He wrote in ink on large sheets of paper with his quill pen. Each day Jefferson would discuss the ideas for the declaration with some of the other men who had gathered in Philadelphia. After these talks, Jefferson would sometimes tear up his most recent draft of the declaration and start over. He wanted to get every word just right. The declaration had to explain more than why the colonies could no longer live under British rule. More importantly, it had to tell the world what this new country hoped to stand for. It would not have a king. It would set up a government in which ordinary men decided the laws. After the Declaration of Independence was finished, it was signed on July 4, 1776. It has become one of the most important statements of freedom. It has inspired people around the globe to fight for their freedom as well. Thomas Jefferson wrote, “We hold these truths to be self-evident, that all men are created equal.” This meant that this new United States would treat everyone the same. Jefferson may not have realized how powerful those simple words would be for hundreds of years to come. Chapter 1: A Battle for America After Columbus set foot in the “New World” in 1492, many European countries wanted to rule different parts of North America. Great Britain, France, and Spain controlled almost the entire continent. Great Britain had thirteen colonies along the east coast, where most settlers lived. France—Great Britain’s great rival—had the largest area of land, north and west of the colonies. But not many settlers lived there. Same with Spain—it had a bigger chunk of land than Great Britain but with far fewer people. In 1754, Great Britain tried to grab more of North America by invading lands controlled by the French. This led to a war known as the French and Indian War. A young lieutenant colonel named George Washington served in the British army, fighting against the French. Most American colonists wanted Great Britain to win the war with France. And, after many years, it did. Great Britain doubled the area of land it controlled. During the war, many British soldiers were sent to America to fight. That had been very costly. King George III had to borrow massive amounts of money from other countries. After winning the war, King George III had to pay back what he owed. In the king’s mind, he had been defending the American colonies against the French. So he expected the colonies to help with the war debt. This angered people in America. It wasn’t the colonists’ idea to start the war. It had been fought because the king wanted more land. So why should Americans have to pay? King George III didn’t listen to that argument. The British government—called Parliament—taxed the American colonists heavily to pay for the war debts. The American colonists had no one representing them in Parliament. It met in London, more than three thousand miles away and across the Atlantic Ocean. The colonists had no way to argue against the high taxes. Did Parliament decide on all laws governing the colonies? No. There were local governments with men elected by their fellow colonists. In Virginia, for example, there was the House of Burgesses. However, none of these groups had much power. In each colony, a royal governor made all the important decisions. Whatever the governor decided should be the law was the law. And he was appointed by the king. So Great Britain always had the final say about all laws and taxes. This got people in the colonies angry. Very angry. Read more ( javascript:void(0) )
Show More
Reviews

What Is the Declaration of Independence? (What Was?)