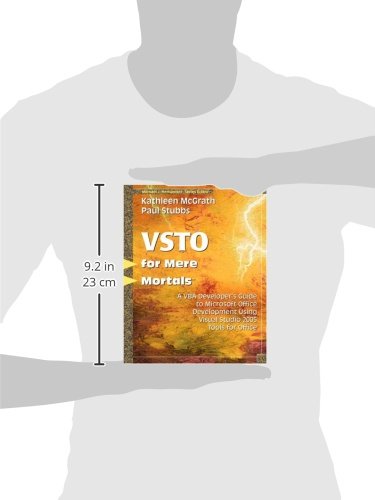 Praise for VSTO for Mere Mortals™ ---------------------------------- "This is the book I wish I'd had when I was first introduced to VSTO and the .NET Framework. It will be invaluable not only to those considering VSTO, but for anyone transitioning from Office VBA to Visual Basic.NET. The wide range of subjects covered provides an entry point for the more in-depth, developer-oriented documentation available on MSDN and elsewhere." –Cindy Meister, MS Word MVP " VSTO for Mere Mortals™ does a great job of building a bridge between the worlds of VBA and VSTO. Kathleen and Paul show how a VBA developer can have the richness of Office and also the power, maintainability, and security of Visual Studio. They succeeded in writing a book that is approachable, understandable, and compelling." –KD Hallman, General Manager, Microsoft, Developer Division "This book is an excellent choice for VBA developers looking to make the switch to .NET development for Office using Visual Studio Tools for Office. In many instances VB.NET code is presented alongside equivalent VBA code to help illustrate key conceptual and usage differences." –Steve Hansen, OfficeZealot.com, author of Mastering Excel 2003 Programming with VBA and coauthor of Mastering Excel 2000 Premium Edition "Visual Studio 2005 Tools for Office is the way to go for building managed Office applications. If you're moving from VBA to managed code, this book shows you the way." –Ken Getz, Senior Consultant, MCW Technologies, LLC "This book is highly recommended for VBA developers who are interested in doing Office programming using the rich power of Visual Studio and .NET." –Mei Liang, Software Design Engineer in Test, Microsoft "Kathleen McGrath has stuffed VSTO for Mere Mortals™ with in-depth code samples that demonstrate VSTO in an easy-to-understand way. From simple how-to's to advanced functionality, it's all here. I learned a great deal from reading this book." –Justin Whitney, Technical Journalist "This book provides an instantly accessible resource for VBA and Office developers to become familiar with the powerful new Office development platform, but even goes beyond that, providing a number of 'worth the purchase of the book' tips, fully functional examples, and elegant methods from someone who has obviously spent a lot of time with these tools to help the mortal on the path to becoming a guru." –Rory Plaire, Solutions Architect, DigitalCommons LLC "For the Office VBA developer interested in programming in .NET or the .NET programmer looking to move to the Office platform, this book is worth its weight in gold. If you are looking for a complete, well-written source to quickly get you up to speed to develop and program Office solutions in Visual Studio 2005, I believe this book is a must-have." –Frank Rice, Programming Writer, Microsoft Office Developer Center "With this book, VBA developers have access to a great resource that will help them understand essential concepts of managed code and best practices to migrate VBA solutions to Visual Basic 2005 and Visual Studio 2005 Tools for Office. This book goes beyond an introduction to VSTO to introduce the new world of VSTO 2005 SE and the 2007 Microsoft Office system." –Erika Ehrli Cabral, Site Manager, MSDN Office Developer Center, Microsoft "Kathleen and Paul have been involved with VSTO in one way or the other from its very beginnings, and it shows. Their depth and breadth of knowledge is reflected in this detailed and authoritative book. I highly recommend it for any professional developer making the transition from VBA to managed code." –Eric Lippert, Software Design Engineer, Microsoft VSTO for Mere Mortals™ is for VBA developers who are interested in migrating their skills to the next generation of Office development. Readers will benefit from a straightforward, practical introduction to writing managed code applications for Word 2003, Excel 2003, and Outlook 2003. Readers will also learn how to create add-ins for the most popular applications for Office 2003 and the 2007 Microsoft Office system using VSTO 2005 SE. The expert authors provide a wealth of code samples that show off popular features of VSTO, such as smart tags and the actions pane. Sample code also shows you how to customize the new UI features of the 2007 Microsoft Office system, including the ribbon, custom task pane, and Outlook forms region. VBA developers will walk away with * A greater understanding of managed code and the Visual Studio integrated development environment (IDE) * Multiple demonstrations on how to create document-level customizations for Word 2003 and Excel 2003, using view controls, data binding, and the actions pane * A comprehensive overview of add-in development for Outlook 2003 * Useful information on securing and deploying solutions created with VSTO and VSTO 2005 SE * A thorough explanation on how to migrate VBA solutions to Visual Basic 2005 and VSTO * Numerous details on customizing the ribbon, custom task pane, and Outlook form regions by developing VSTO 2005 SE add-ins for the 2007 Microsoft Office system
Show More
Reviews