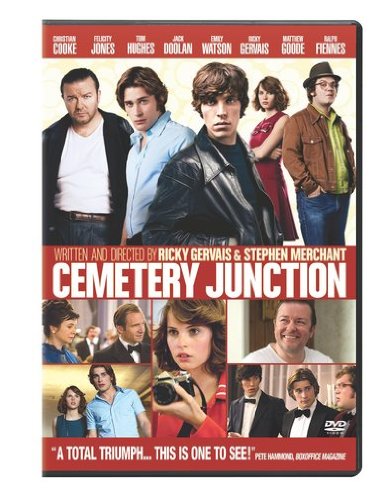 Brand : Sony
from USA
to Australia
in 5-8 days
At your doorstep by Dec 03  to Dec 06 with standard delivery

Ricky Gervais and Stephen Merchant, the duo behind the BBC's Office, travel back to 1973 for this serio-comic coming-of-age story. Inspired by Gervais's Reading hometown, Cemetery Junction is the type of small-minded burg Freddie Taylor (Christian Cooke, likable and attractive) longs to escape. Fortunately, he receives a job offer from Mr. Kendrick (a smarmy Ralph Fiennes), leading to a gig selling life insurance. His best mates, the goofy Snork (Jack Doolan) and rebellious Bruce (Tom Hughes, the film's true star), can't imagine anything more dull, but Freddie, who wants to travel the world, sees it as his way out. Kendrick pairs Freddie with Mike (Matthew Goode, great value), who proves that the nice-guy approach loses sales (Emily Watson shines as Kendrick's browbeaten wife). While Freddie pines for the boss's daughter (and Mike's fiancée), Julie (Felicity Jones), Bruce works with Freddie's father, Len (Gervais), in a factory, and tangles with the law (refreshingly, the local sergeant has a sympathetic side). If things end as one might expect, that doesn't make Cemetery Junction any less enjoyable, but it does help to explain why it didn't receive a U.S. theatrical release. By focusing on a young Brit anxious to find his place in the world, the directors provide a companion piece to pictures like Starter for 10 and An Education. Familiar or not, it's still superior to most mainstream comedies… including a few with which Gervais has been involved. A soundtrack filled with energizing glam-rock classics further elevates their efforts. --Kathleen C. Fennessy
Show More
Reviews