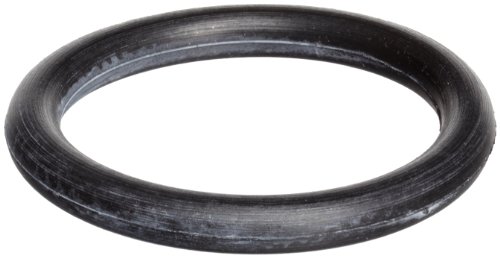 Brand : Small Parts
from USA
to Australia
in 5-8 days
At your doorstep by Dec 11  to Dec 14 with standard delivery

This O-ring is made of black Buna-nitrile, is round in cross-section, has a durometer of 70A, and is designed for use in a wide variety of sealing applications. Buna-nitrile can have high tensile strength, and abrasion, tear, and compression set resistance. It can be used in temperatures between -30 degrees F (-34 degrees C) to 250 degrees F (121 degrees C), and is compatible for use with petroleum, HFA, HFB and HFC fluids, vegetable oil, alcohol, acids and aliphatic hydrocarbons. Buna-nitrile is vulnerable to acetone, ethers, esters, ozone, sunlight and weathering and should therefore not be used in ozone-generating electric motors, welding equipment, or in applications with exposure to UV light. This Buna O-ring has a shore durometer of 70A. Shore durometer is the hardness of a material, and its resistance to permanent indentation. A higher durometer value indicates greater resistance to indentation on a scale of 0 to 100, with 100 indicating no indentation. O-rings commonly provide a pressure and fluid seal between cylindrically shaped, overlapping mating surfaces and are commonly seen in engines, faucets, flanges, valves, and various cylinders. They are circular in shape, with a round cross section, and a hole in the center, similar to a doughnut. O-rings are available in various sizes, and can be ordered based on required nominal inside diameter (ID), outer diameter (OD), and cross-sectional (CS) diameter. These Buna-nitrile O-rings meet standards defined by Aerospace Standard AS568A, which is the Aerospace Size Standard for O-rings.
Show More
Reviews